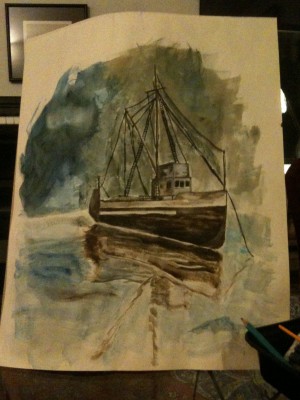 On the afternoon of Sunday, August 18th, SPACE on Ryder Farm hosted an event called “The Women’s Circle”. The programming for the event was intended to create an environment where women from different backgrounds could come together and talk about what it means to each of us to identify as women in today’s world. The advertising language for the event was purposefully general, citing only the conflicting and often confusing messages that women receive – from the media, from culture, from politics and from history – and how these conflicting messages manifest themselves in ways that influence our decision making and identifications. Despite the lack of specificity in our invitation, we received an overwhelmingly positive response from the women we reached out to. I have never gotten so much feedback from a single email I’ve sent! Clearly, we were not alone in feeling as if there was a need for women to come together and explore the subject of female identity in 2013.

What was most surprising about the affirmation that we received around organizing the Women’s Circle was that we had not specified, nor had we any intention to pursue, any kind of specific objective for the event. The world I’ve grown up in has always felt oppressively product-oriented, and that our event was not made it difficult for us to articulate exactly what we were hoping to accomplish. With this writing, I’m going to try to describe what I felt as though we were able to accomplish and why it felt important.

I value process-oriented exploration for the sake of reflection and personal growth. While I consider myself an advocate and a proactive individual, ultimately, I think that combating injustice and oppression is a deeply internal process. For me, it is a struggle towards compassion and understanding and along the path to realizing those things, I must encounter and wrestle with my own prejudices, shame, resentments, insecurities and anger. The process of sharing and listening to others while thinking about the influences that have shaped our identities can help us traverse the challenging road towards understanding.

This is the process that we engaged in together through small group discussions during the Women’s Circle. Prior to the discussion, we had two wonderful speakers who provided a kind of framework through which we were able to begin asking internal questions. Our first speaker, who is a university professor, said something that seemed to resonate with all of us. She told us that in nearly every class she had, a young woman would invariably raise her hand and say something like, “I’m not a feminist, but…”. Our speaker asked us to think about how we identified with the word feminist. Why is it something that we so often don’t want to be associated with, and how is that really serving us? What could feminism mean?

Our gender informs our identity, just as race, age, culture, and sexual orientation do, and the positive and negative qualities and characteristics that have been assigned to gender (or race, age, culture and sexual orientation) also heavily influence us, whether we realize it or not. Consciously or unconsciously, we often perpetuate value judgments associated with certain groups, and allow those judgments to inform intimate choices around family planning, educational interests, career paths, and many many other personal choices. These influences may not always be negative, but it feels crucial to be able to talk about them and understand better how much or little they impact us. Women need a forum to discuss the ways in which culture, politics and society are influencing our lives in order to make choices that feel authentic and sincere. The first Women’s Circle event scratched the surface of this process, and we look forward to organizing more and digging in deeper.

Visit the forum to add to this conversation